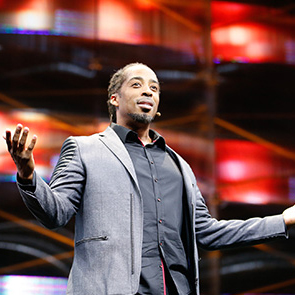 What must it be like to perform for Barack Obama in Oprah Winfrey’s backyard? Sekou Andrews is the creator of Poetic Voice, a new, cutting-edge speaking style that seamlessly fuses inspirational speaking with spoken word poetry to make messages more moving and memorable. This schoolteacher turned actor, musician, two-time national poetry slam champion, and entrepreneur has become the world’s leading “Poetic Voice”. He helps Fortune 500 companies and global organizations with brand messaging, including Google, Toyota, Nike, Paypal, Global Green, Johnson & Johnson, Genentech, and ASAE. He has been featured on national media outlets, including ABC, MSNBC, HBO, Showtime, MTV and BET. Sekou has presented privately for such luminaries as Larry King, Quincy Jones, Hillary Clinton, Bono, Maya Angelou, and Norman Lear, and has shared the stage with music heavyweights Stevie Wonder, Jay-Z, Maroon 5, Kendrick Lamar, and the Pasadena Pops Orchestra to name but a few. Forbes calls Sekou “the de facto poet laureate of corporate America”. But Sekou does more than inspire us with his story; he inspires us with our story.

If you ever have the chance to hear this man https://t.co/oU5o9jq4RI then do whatever you can to spend time to make it happen. Throw away your pre conceptions about communicating and living in the modern world. My favourite conference speaker ever.